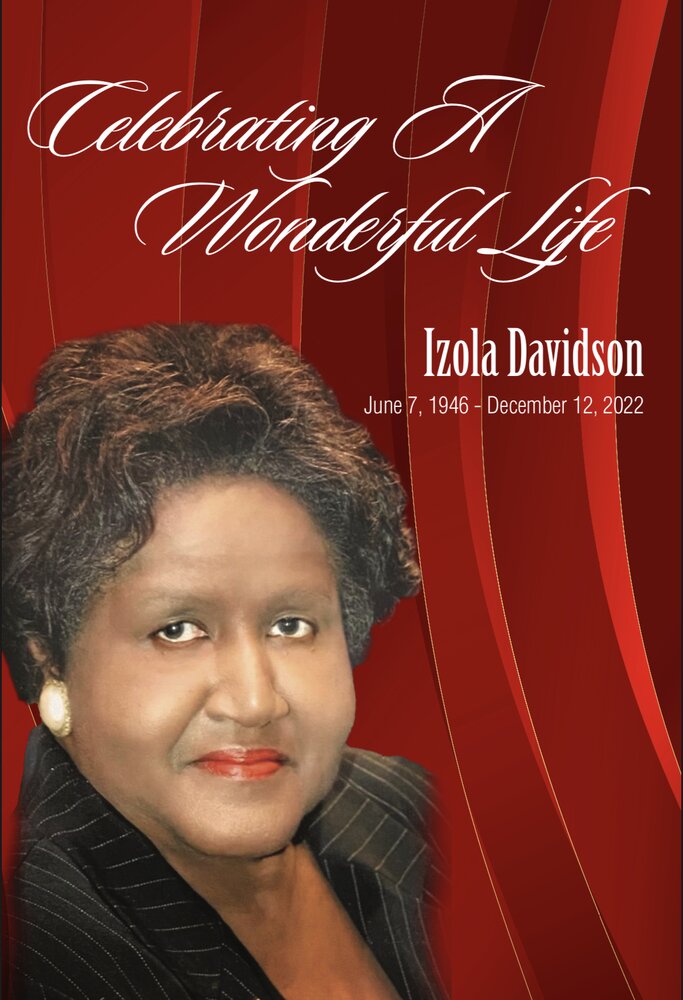 Please share a memory of Izola to include in a keepsake book for family and friends.
View Tribute Book

But thanks be to God, which giveth us the victory through our Lord Jesus Christ – 1 Corinthians 15:57

On Monday, December 12, 2022, Izola Davidson was beckoned from this earth to joyfully transition into the arms of Jesus, our Savior and Lord.  Izola was born on June 7, 1946, the youngest of 6 children born to the late Finus and Mayfair Putnam.

Instilled early in life with a strong belief in God, Izola was dedicated to the Lord and solid in her faith. After marrying the love of her life, the late Rick Davidson, Izola joined St. Andrews Presbyterian Church with him. While at St. Andrew's, Izola often extended her hand of hospitality and assisted with many of the receptions and special events by offering her gifts of décor and tablescapes, often bringing in her personal selection of linens and china for all to enjoy. After the death of her husband, Izola moved her membership and joined her daughter, Sandra Putnam – Broadway and reunited with the Temple Church.

Growing up in Nashville, Izola graduated from Pearl High School and later attended Tennessee State University. Izola always displayed a big heart for her family, friends, and others. Hence, it was no surprise that she worked in banking early in life. Later, she became a housing counselor for Tennessee Housing Development Agency. After early retirement from the State, Izola reentered the workforce and began working for Tennessee Orthopedics before retiring again, this time for good.

Izola was a quiet and gentle spirit who impacted her family's and friends' lives by simply being the voice of reason, hilariously straightforward, and a woman of much grace and integrity. Izola was a devoted wife to her late husband for over forty years; you hardly ever saw one without the other as they simply adored each other. Izola was also an amazing mother to her daughter Sandra and her son Derrick. Rick affectionally named Izola, Derrick, and Sandra the triplets, as he often joked that her children were just like her. After the passing of Derrick in 2000, the triplets became the twins.

Izola could easily be found giving back to the community throughout her entire life. Whether it was giving to Fisk University, Heroes for Heart, designing tablescapes for the United Negro College Fund fundraisers, or designing her tables for Sparkling Settings fundraisers at Cheekwood; she did it all with a sincere spirit of excellence. Izola was a past member of the Music City Links, Links Inc., and the Crump Hamilton Foundation, where she served as treasurer of both during her tenure and the 100 Black Women of Middle Tennessee. Izola was also a Vanderbilt's Children's Hospital advisory board member, serving faithfully on the design team. In addition, Izola served for several years as the President of Ardent Gardeners Garden Club and served for a period as Chaplain for the Horticultural Society of Middle Tennessee. At the time of her death, Izola was still an active member of Ardent Gardeners and the Horticulture Society of Middle Tennessee.

Izola leaves to celebrate her life, legacy, and memory-loving and devoted daughter, Sandra. She also leaves cherished siblings Juanita Miller and Marro Martin, along with a host of nieces, nephews, and friends.

Please keep the Davidson family in your thoughts and prayers.

To send flowers to the family or plant a tree in memory of Izola Davidson, please visit Tribute Store
Thursday
22
December

Look inside to read what others have shared
Family and friends are coming together online to create a special keepsake. Every memory left on the online obituary will be automatically included in this book.
View Tribute Book
Share Your Memory of
Izola
Upload Your Memory View All Memories
Be the first to upload a memory!
Share A Memory
Send Flowers
Plant a Tree