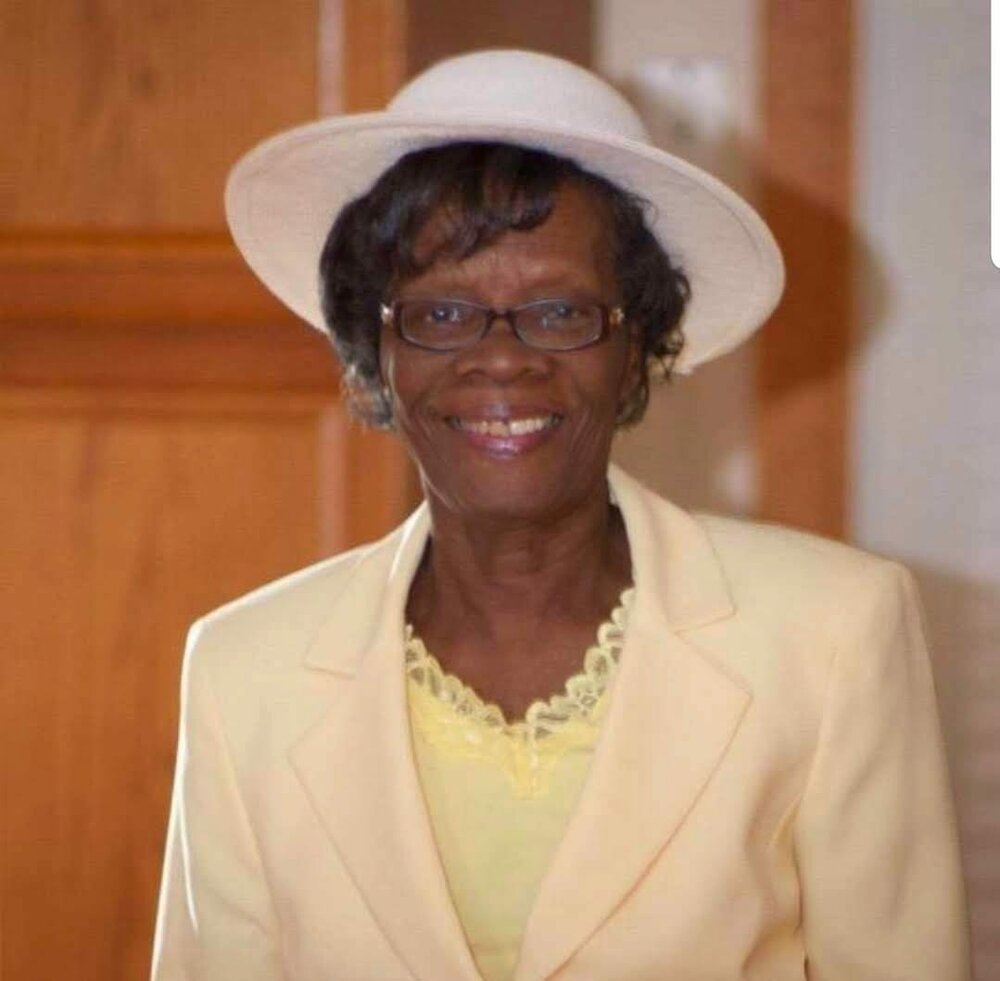 Please share a memory of Eunice to include in a keepsake book for family and friends.
View Tribute Book

Nestled between the Blue Mountain and the John Crow Mountain, thirteen miles away from Port Antonio in the district of Cornwall Barracks, Portland on February 20,1936 Wilfred and Julian Bailey welcomed their twin girls Kathleen and Eunice Bailey, into this world. It was a very exciting time for the Bailey family!

Their grandfather was so elated to welcome his second set of ‘grand-twins' into the Bailey family, that he bequeathed unto them a piece of land each. Eunice was fondly known by the ‘pet name’ Nicey or Sykie.

Eunice was the 5th child of Wilfred and Julian Bailey, there were ten Bailey children in total, six of whom preceded her in death: Murline, Mavis, Calman, Justin, Clara and a baby girl who died soon after her birth who was affectionately called Pinks Bailey.

Eunice attended the Comfort Castle All–Age School, and was also a member of the Cornwall Barracks Seventh Day Adventist Church.

On Christmas Eve, when Eunice was just 11 years-old, her mother died. Her eldest sister Mavis and her father were left to care for the younger children.

In 1953, Eunice was separated from her siblings and moved to Port Antonio where she lived with her cousin Euphemia.

While living in Port Antonio, Eunice became the adopted mother of Anthony Moo Young, whom she cared for until he migrated to England in 1969. Angella was her first born daughter, followed by two more sons, Joel and Peter. Later she gave birth to Kay and Marisa. Kay was sadly separated from her twin at birth.

Later, Marisa experienced the loss of her beautiful twin sister at the tender age of 6. Despite such heartbreaking loss, Eunice was able to ground herself in her faith, and allowed her love to heal the hearts of her children.

After the early death of the children’s father, she became employed at the famous “Navy Island” owned at the time by renowned actor Errol Flynn.

Eunice also worked at the Front Porch Restaurant for a few years, managing the daily operation of the restaurant and serving as a chef. During this period of her life she ensured as a single parent, that all her children received a high school education. Her children were not the only ones benefitting from her culinary delights, everyone who graced their palettes with her delectable cuisine fell in love instantly! She was especially known for her Curry Chicken and Rice’, ‘Oxtail’-’seasoned down to the bone’, and her ‘Red Pea Soup’ amongst other mouth-watering meals.

Her love for education was not just important for the children she bore, she assisted her many nieces and nephews in their individual pursuits as well, so they could have the opportunity to attend any of the high schools in the town of Port Antonio. At any given time, her dining table could be filled with other children eager to learn, she generously opened her home to them. Many of the children came from the countryside as well as from England. Anyone in need of a place to stay.

With few resources, she beat all odds, and was successful in having all of her children pass the Common Entrance exams which gained them access and acceptance to Titchfield High School, one of the premier educational institutions in the country of Jamaica. Her children excelled both academically and athletically. They were also exposed to a myriad of other opportunities and experiences which helped them recognize their potential to grow and develop their individual skills and talents- ultimately shaping them into the well-rounded adults you see before you today, all proud to possess some of her many attributes.

Eunice’s kindhearted giving nature made it possible for her to help her relatives that lived in the country, get access to the jobs in town. Many others were welcome to stop by to spend the night on their way to Kingston or heading back to their home in the country. Eunice was the epitome of hospitable.

In the 1990’s she made two trips to England to visit her beloved identical twin sister, Kathleen. Kathleen recently visited Eunice here in Tennessee in August 2019 with her grandson Troy and spent a wonderful summer together with the whole family.

Through oral history we learned that when the twins’ were very young, they would make their dolls from cloth and make their dresses from paper. Even though the two sisters kept in close contact with their siblings, they maintained a close bond with each other, mainly by phone and ‘facetime’ with the help of their daughters. Despite the distance apart, she shared a very close relationship with her twin sister, Kathleen, even just a few weeks before her passing on July 17, 2022. Both sisters are widely known and admired amongst their church sisters and brothers for their fashionable style of dressing, and especially known for their hats and color coordinated suits.

Both were dedicated members of their churches and Eunice would be known at times, on Sabbath days, to make notes from sermons preached, highlighting points of interest in her bible or from various programmes that touched her. This was a regular habit of hers, here at Riverside SDA church as well as in Port Antonio SDA church where she was a dedicated and faithful member for several years. She served and assisted in various capacities, especially in the Welfare Department there.

Eunice will be remembered for her generosity, faithfulness to her God and church, her discipline and loving, caring nature. Her nieces, Corrine known as ‘Pearly’ and Vereen Harris hold fond memories of their Aunt.

Their auntie was a fashionista who could style them for any upcoming events, they were even allowed to raid her closet.

After some years, she moved to Kingston to live with her son Peter and his wife Patricia. There, she continued her charity work in collecting and sending goods to the less fortunate. During her life in Kingston, many persons could attest to her warm and caring spirit from the very young and old alike. It is very befitting that she became affectionately known as ‘Gran’. Even here in Tennessee, her reputation and name proceeded her.

She was not only referred to as Gran by her grandchildren but by many others lucky to know her.

She lovingly shared her knowledge and experience with them. She made sure that her grandchildren were raised with the same ethics and principles she had bestowed upon their parents before them. Yohan, her youngest grandchild, reciprocated his love in a most beautiful way, as a budding researcher, he googled information on how to cure his Grandmother’s illness. We can recall him asking the nurses at the hospital to “turn her back to normal”. This is just one example of a testimony her love created.

Although she didn’t have formal higher education, she was mentally sharp and keen. She was an avid reader of newspapers, radio and later CNN. She was able to master technical things, you only had to show her once. She easily went from coal stoves to kerosene stoves and from gas stoves to electric stoves and microwaves. From needle and thread to sewing machines. From buying ice at the ice factory to fixing the refrigerator ice maker herself whenever it jammed.

Her favorite TV shows when she wanted to wind down was “The Price is Right” and for some strange reason her favorite comedian was Kevin Hart. But without question, her favorite TV channel was 3ABN. Those who know, will understand.

After traveling between Jamaica and Tennessee for a while, she finally settled here in Tennessee in 2004 with her son Joel and his family. She remained the matriarch of the entire family until her passing.

She loved her Jesus, her family, her friends, her church brothers and sisters and her country. She lived her life in service with few regrets. Rest In Peace , Mom.

To send flowers to the family or plant a tree in memory of Eunice Bailey, please visit Tribute Store
Saturday
20
August

Look inside to read what others have shared
Family and friends are coming together online to create a special keepsake. Every memory left on the online obituary will be automatically included in this book.
View Tribute Book
Share Your Memory of
Eunice
Upload Your Memory View All Memories
Be the first to upload a memory!
Share A Memory
Send Flowers
Plant a Tree