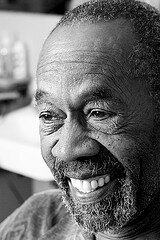 Please share a memory of Vernon to include in a keepsake book for family and friends.
View Tribute Book

Vernon Winfrey, age 89, of Nashville, TN, passed away peacefully on July 8, 2022. He is preceded in death by his wife Zelma Winfrey and survived by his daughter, Oprah Winfrey, and son, Thomas Walker.  Vernon opened Winfrey’s Barber Shop, in East Nashville in 1965. Vernon was an active member in the community. From 1975-1991, he served on the Nashville Metropolitan Council as a Councilman representing the 5th district. He served on the Board of Trustees for Tennessee State University and Tennessee State Barber Board. Vernon was a charter member of Faith United Missionary Baptist Church and a deacon for 45 years. In 2016, Vernon was inducted into the National Barber Hall of Fame and honored for his 56 years as a master barber.

To send flowers to the family or plant a tree in memory of Vernon Winfrey, please visit Tribute Store
Wednesday
13
July

Look inside to read what others have shared
Family and friends are coming together online to create a special keepsake. Every memory left on the online obituary will be automatically included in this book.
View Tribute Book
Share Your Memory of
Vernon
Upload Your Memory View All Memories
Be the first to upload a memory!
Share A Memory
Send Flowers
Plant a Tree