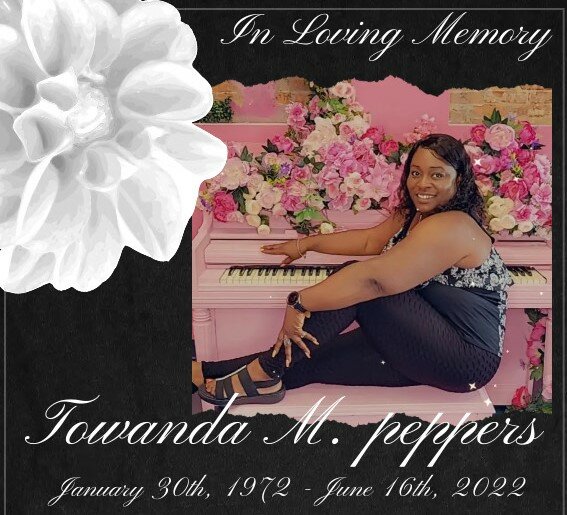 Please share a memory of Towanda to include in a keepsake book for family and friends.
View Tribute Book

Tawanda peppers, a 50 year old resident of Nashville, Tennessee passed away Thursday, June 16, 2022. She was born to Ruby Jefferson and Robert Lucas being their 1 of 2 daughters. Kushan Russell and Towanda had a bond that showed the true meaning of "I AM MY SISTER'S KEEPER".

After graduating from McGavock high school, she quickly found that her passion was serving her community through education. She served 18+ years with Metro Nashville Public school system both inside and outside the classroom. After obtaining her commercial driver’s license, she expanded her passion and started driving for MTA, Greyhound, and Church. Despite the many jobs obtained, she always found time to travel with one of her best friends she liked to call her partner in crime, Latiesha Marable. Gatlinburg, Tennessee was one of her favorite and most memorable places to visit every single year. Whenever Towanda was asked why she traveled so much, her response was always "I'm living my best life”.Towanda's goal was to hit all 50 states and you would think she meant this year because she probably hit 10 before March.

Towanda was an active member of the organization 'Ladies Of Pandora' and Greater Harvest Church of God where she served in any way that she could. 98% of Towanda's Pride and joy came April of 2012 when she obtained her first and only grandchild Keyon Whitefield. She did everything for Keyon. One of her favorite things to do with her grandchild was traveling to the swimming pool which was the highlight of her week right before her departure.

Please keep the Peppers family in your thoughts and prayers.

To send flowers to the family or plant a tree in memory of Towanda Peppers, please visit Tribute Store
Friday
1
July

Walk Through of Family and Friends

Look inside to read what others have shared
Family and friends are coming together online to create a special keepsake. Every memory left on the online obituary will be automatically included in this book.
View Tribute Book
Share Your Memory of
Towanda
Upload Your Memory View All Memories
Be the first to upload a memory!
Share A Memory
Send Flowers
Plant a Tree