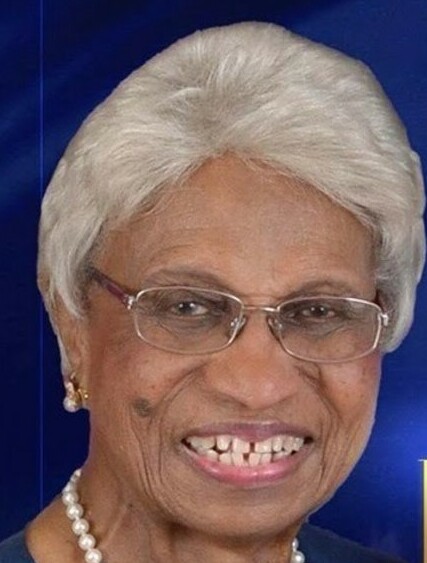 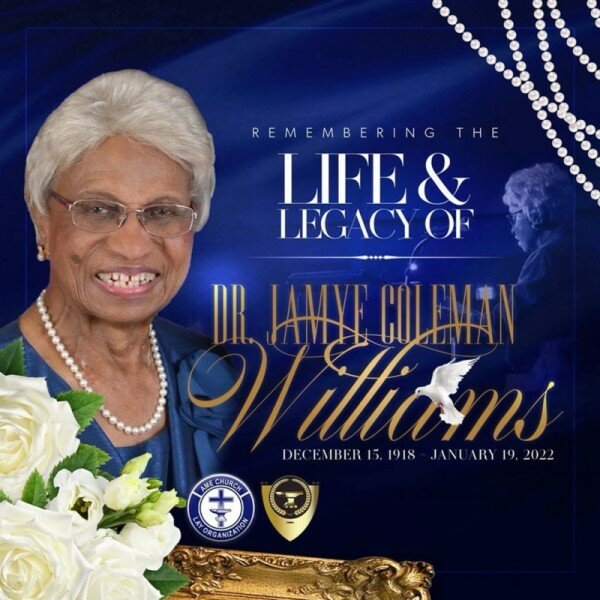 Please share a memory of Jamye to include in a keepsake book for family and friends.
View Tribute Book
Jamye Coleman Williams (December 15, 1918-January 19, 2022) was born in Louisville, Kentucky, to an AME minister and a religious writer.Williams grew up in Kentucky and earned her B.A. with honors in English from Wilberforce University in 1938. The following year, she received an M.A. in English from Fisk University. Over the next twenty years, she taught at four AME colleges—Edward Waters College, Shorter College, Morris Brown College, and Wilberforce University. In 1959, she completed her Ph.D. in speech communication at The Ohio State University, and that fall joined the faculty of Tennessee State University. She became a full professor of the Department of Communication and in 1973 took over as head of the department, serving in that capacity until her retirement in 1987. At the same time that her academic career took off, Williams began to ascend the leadership ranks of the AME Church. She served as a delegate to the AME General Conference in 1964 and became a board member of the National Council of Churches in 1968. From 1976 to 1984, she was an alternate member of the AME Church's Judicial Council, and served as president of the 13th District Lay Organization from 1977 until 1985. At the 1984 General Conference, Williams was elected editor of The AME Church Review, the oldest African American literary journal. She held that post for eight years. Williams also paved the way for others in the AME, helping win the elections of all the female bishops. During her forty-five years in Nashville, Williams was active in her community, serving on several interdenominational organizations, community groups, and civic committees. She worked as a member of the NAACP's Executive Committee and in 1999, received the organization's Presidential Award. She was also active with the YWCA, founding member of Women’s Fund of the Community Foundation of Middle Tennessee, Community Nashville, to name a few.She was also known for her fierce devotion to her alma mater, Wilberforce University—her “magnificent obsession”—where she taught for 12 yeas, served as a trustee and then trustee emerita. Dr. Williams was also a member of Delta Sigma Theta Sorority, Inc. and The Links, Inc. Prior to moving to Atlanta in 2003, she was a forty-five year member of St. John AME Church, Nashville, Upon her death, she was a devoted member of Big Bethel AME Church. She was predeceased by her husband of over seventy-five years, Dr. McDonald Williams, in 2019. She is survived by her daughter Donna M.Williams, grandson, Douglass P.(Pamela) Selby, two great-granddaughters, Jamye and Payton Selby, a niece, Frieda Coleman Minga, and a host of extended family, former students, and friends. In lieu of flowers, the family requests donations be made in memory of Dr. Jamye Coleman Williams to Wilberforce University, c/o Development Office, 1055 N. Bickett Rd., P.O. Box 1001, Wilberforce, OH 45384 or online to https://www.justgiving.com/campaign/WU-JAMYECLASS1938 Three ways to view the service: 1 – Go to https://bigbethelame.org/ and click on “Watch Live” button. Then click on Live Stream to view the service. 2 – Go to https://www.facebook.com/BigBethelAME and scroll down to service on right hand side of screen. Then click on Live Stream to view the service. 3 – Go to https://ame6.church/ and click on “Watch Live” button. Then click on Live Stream to view the service.
To send flowers to the family or plant a tree in memory of Jamye Williams, Ph.D., please visit Tribute Store
Friday
28
January

Look inside to read what others have shared
Family and friends are coming together online to create a special keepsake. Every memory left on the online obituary will be automatically included in this book.
View Tribute Book
Share Your Memory of
Jamye
Upload Your Memory View All Memories
Be the first to upload a memory!
Share A Memory
Send Flowers
Plant a Tree