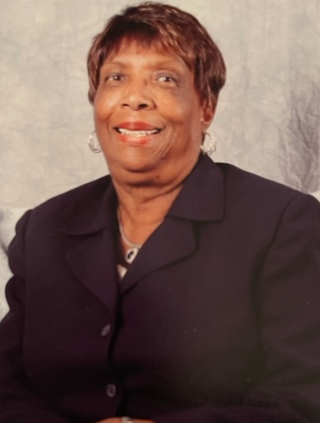 Please share a memory of Patricia to include in a keepsake book for family and friends.
View Tribute Book
Another precious link in our family chain was broken, as Patricia (Pat) Ann Napoleon Manning valiantly transitioned to her heavenly home on December 24, 2021. Pat was born in Davidson County on September 3, 1936 to the late Thompson Napoleon and late Mary (Honey) Hayes Napoleon Hart. She was raised in “The Village,” Old Hickory, TN by her Mother and Grandparents and was educated in the Davidson County School System. She was a proud 1953 graduate of Haynes High School and went on to receive a Bachelor of Science in Social Administration, with distinction, from Tennessee A&I State University. While attending Tennessee A&I she became a member of Alpha Kappa Alpha Sorority, Inc. At a young age, Pat accepted Jesus Christ as her Lord and Savior and was a member of Macedonia Baptist Church in Old Hickory, TN. Her membership remained there until she moved to Nashville and united with Zion Baptist Church. Pat later moved her membership to Faith United Missionary Baptist Church where she served as a faithful member of the Finance Committee, the Kitchen Ministry, and as a member of the Faithful Ladies. In 1956 she was joined in marriage to Joe B. Manning and to this union three children were born whom she loved, cared for, and supported immensely. In her professional life, Pat worked for several years at the Genesco Company as a Purchasing Clerk. She later went on to work for American Telephone and Telegraph Company (AT&T) and retired from AT&T subsidiary Lucent Technology after 28 years of service in the Telecommunications field. During her working years and after retirement she would utilize her superb leadership and administrative skills to assist many family and church activities. Pat acknowledged her God given purpose as a care giver at an early age and throughout her life faithfully cared for family members and friends in times of need up until the time her health began to fail. The greeting cards she sent to acknowledge birthday’s and other significant occasions along with the phone calls made just to check in on others was her love and compassion in action. Pat also had an active volunteer life. She served as an unofficial volunteer Kindergarten teacher for the children in the “The Village”, teaching them fundamental skills such as the alphabet, reading, and writing. She was a committed member of the Davis-Bloodworth Family Reunion Committee, serving as one of the family elders who recited family stories and helped to preserve the family genealogy. Within the family she was always called upon to make the hot water cornbread. Within the community she opened her home to serve as surrogate mother to many, offering a place of comfort where much wisdom was shared, great home cooked meals were had, and many fond memories were made. Pat was a voracious reader, sometimes reading a book a day. Her favorite genres were mystery and suspense. She also loved to travel with her family and close friends, venturing to more than 35 states and Nassau, Bahamas. With her travel buddies, Mrs. Iona Corley and Mrs. Beverly Taylor, Pat traveled to many locations with fun loving community tour groups and visited St. Thomas and St. John, Virgin Islands as well. Pat loved her family tremendously and unconditionally, and they loved her unfailingly. She is preceded in death by husband, Joe B. Manning and granddaughter, Millicent J. Manning. Those she leaves behind to cherish her memories are daughter Jerrilyn Manning, son Lenny (Rosalyn) Manning, Sr., daughter Mary J. Manning, grandchildren Lenny (Margo) Manning, Jr. (Clarksville, TN), Allison (James) Manning-Carroll (Atlanta, GA), and Michayla George; great-grandchildren Kayden Carroll, Karsen Carroll, and Elias Manning; devoted cousin/daughter, Linda Crutcher; devoted sister in law, Tommie C. Manning (Houston, TX), niece, Sandra Manning; nephew Stanley (Michelle) Manning (North Kingstown, RI) and devoted nephew Jason (Yolanda) Manning Sr. (Houston, TX) as well as a host of other family and friends.
To send flowers to the family or plant a tree in memory of Patricia Manning, please visit Tribute Store
Thursday
30
December

Look inside to read what others have shared
Family and friends are coming together online to create a special keepsake. Every memory left on the online obituary will be automatically included in this book.
View Tribute Book
Share Your Memory of
Patricia
Upload Your Memory View All Memories
Be the first to upload a memory!
Share A Memory
Send Flowers
Plant a Tree