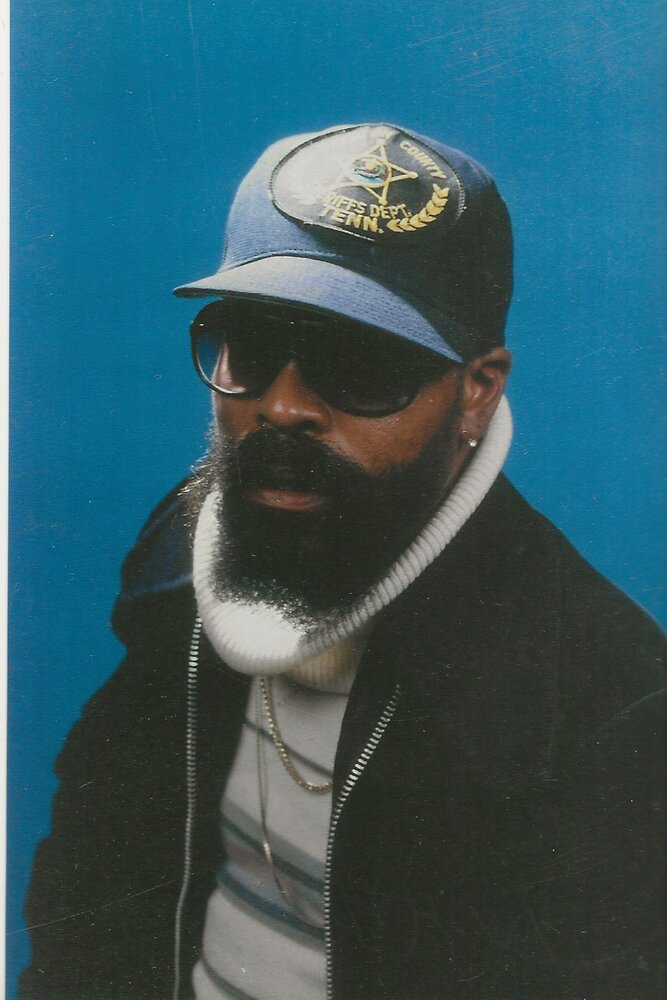 Elwood McKinley “Lovingly Called Bubba” Polk, III January 22, 1951 - October 16, 2021, Nashville, TN Elwood M. Polk, III, age 70, of Nashville, TN entered eternal peace on Saturday, October 16, 2021. He departed this life at Trevecca Healthcare Center, Nashville, TN. He was born in Nashville, TN to loving and caring parents Elwood Polk, Jr and Rubydel Corlew Polk. Elwood M. Polk, III began his faith journey early in life at St. John AME Church, he received his education in the Davidson County Schools a graduate of North High School “Class of 1969” and furthered his education at Tennessee State University. He was a member of the Reserve Officer Training Corps (ROTC) expanding his academic and leadership skills, as well as a member of the TSU Aristocrat of Bands. He had a passion for music and muscle cars. Prior to his illness in his spare time, he loved connecting with nature spending time outdoors, gathering with family, and listening/playing music. Bubba played his harmonica during his later years, loved to dance, and enjoyed listening to music! Music gives a soul to the universe, wings to the mind, flight to the imagination and life to everything. -Plato Surviving Family Forever in Our Hearts: Dedicated Daughter Tracey Polk (Errol) Isaac (IN), Fervent Sister Nedra (Tony) Morris-Bailey, grandchildren: Morgan & Madison Isaac (IN), Aunt Susie Cobb, nephew Justin (Tracy) Morris and great niece Riverlyn Morris (SC). Cherished friend Wayne “Bubba T” Thompson, a host of relatives and friends. Proceeded in death by his loving parents: The Late Elwood Polk, Jr, and Rubydel Corlew Polk, adoring brother: The Late Travis Polk, and Late paternal and maternal grandparents. He was kind, strong will, loving, and fun to be around. Sleek, stylish, and sported suave hats a part of his wardrobe. Elwood M. Polk, III and Betty Owens became the happy parents of a baby girl, Tracey, who made him an incredibly happy and proud dad. A couple of Bubba’s biggest accomplishments was being a father and big brother. Tracey’s achievements made him proud to be her father. He truly adored Nedra his sister’s strength and support. He considered himself blessed to have them both. Bubba loved his Red Pontiac GTO, his favorite back in the day! An outstanding instrumentalist: he played in the band at North High School, TN State University Aristocrat of Bands, The Higher Ground Band, and other local bands where he performed, entertained, and brought musical pleasure to many for numerous years. Visitation and Memorial Service at Lewis & Wright Funeral Directors, 2500 Clarksville, Pk, Nashville, TN 37208 on Friday, October 29, 2021. “Mask Required” Visitation 2:00 pm– 4:00 pm, His family will be present to welcome friends and loved ones.
To send flowers to the family or plant a tree in memory of Elwood Polk, III, please visit Tribute Store
Friday
29
October

2:00 pm - 4:00 pm
Lewis & Wright Funeral Directors
2500 Clarksville Pike
Nashville, Tennessee, United States
Masks must be worn at all times while inside the building.
Need Directions?
View Map | Text Directions | Email Directions
Order Flowers for Elwood Polk, III's Public Walk Through of Family and Friends
Share Your Memory of
Elwood
Upload Your Memory View All Memories
Be the first to upload a memory!
Share A Memory
Send Flowers
Plant a Tree