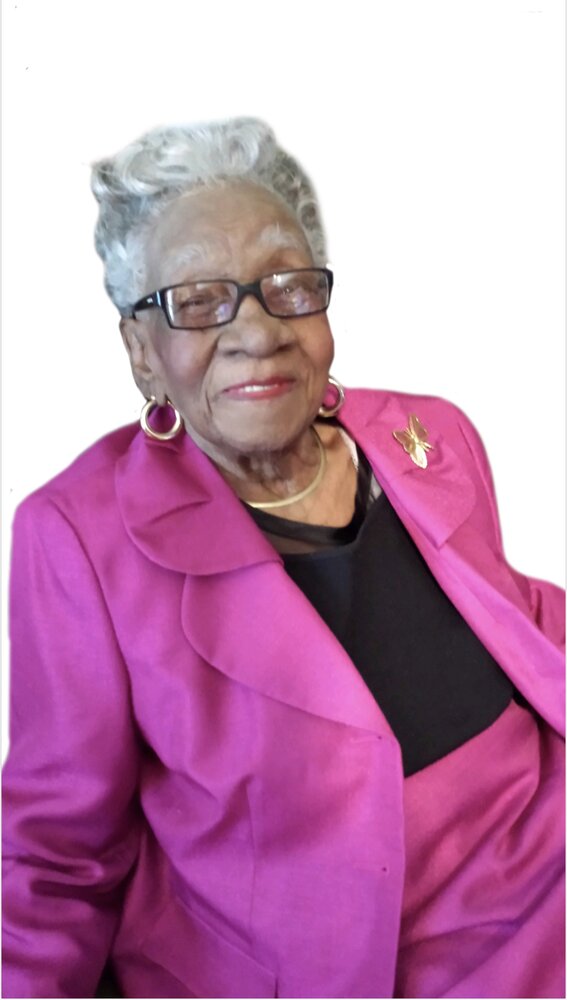 Please share a memory of Mrs. Lena to include in a keepsake book for family and friends.
View Tribute Book
Mrs. Lena Pearl Marie Rhodes Farrell was born January 20, 1918 to Evalena and William Rhodes in the small town of Lawrenceburg, Tennessee. Her siblings were Vera Rhodes, Frank A. Rhodes, William Leon Rhodes and Raymond Chalmers Rhodes; Mrs. Farrell graduated from Clarke High School in Mount Pleasant, Tennessee in 1938. She enrolled at Tennessee Agriculture & Industrial college later to become Tennessee State University (TSU) in the fall of 1938. She majored in English, Elementary Education and graduated in 1942; Mrs. Farrell married her high school and college sweetheart, Dr. James Edward Farrell in 1940. Mrs. Farrell and her husband resided in Monrovia, Liberia from 1965-1969. She and her husband were the parents of two children, LaVera Ayers and William Ulysses Farrell. She has numerous grandchildren, great-grandchildren and great great grandchildren. Mrs. Farrell receive her Master’s Degree in Adult Education from TSU in 1973. She was employed at TSU from 1973 until her retirement in 1986 as a Special Needs Coordinator and Community Outreach Specialist. She has traveled the world visiting many European countries and 38 out of the 50 states of the USA. Lena was a strong and faithful servant who took joy in humor and was always ready with a quick come back. Mrs. Farrell was a Diamond Soror of Alpha Kappa Alpha Sorority, Inc. The Music City Chapter of The Links Incorporated, and a member of Clark Memorial United Methodist Church. She was also a member of Archousa in Sigma Pi Phi fraternity Inc, Chi Boule`. Some of her interests have included reading, travel, playing bridge, scrabble and arts and crafts. One of her favorite sayings is,” I love to give back to others because I always want to help and serve.” Mrs. Farrell is survived by loving daughter, LaVera Farrell Ayers, loving granddaughter, Dr. Chirelle (Derrick) Lakine; grandsons, William U. (Billy) Farrell, Jr. and wife, Tracy from Denver, Colorado; Scott Farrell from Denver, Colorado and Robin A. Farrell from Denver, Colorado. Great Grandchildren: Devon Jefferson, Nashville, TN, Blaire Farrell-Colorado; Morgan Farrell-Atlanta, Ga.; Brea Marie Farrell Jefferson-Memphis, TN.; Jurnee Farrell-Denver, Colorado; Andrew Farrell-Las Vegas, NV; Avyon Farrell-Las Vegas, NV; Jayden Farrell-Denver, Colorado, and Maika Farrell-Denver Colorado.
To send flowers to the family or plant a tree in memory of Mrs. Lena Farrell, please visit Tribute Store
Friday
17
September