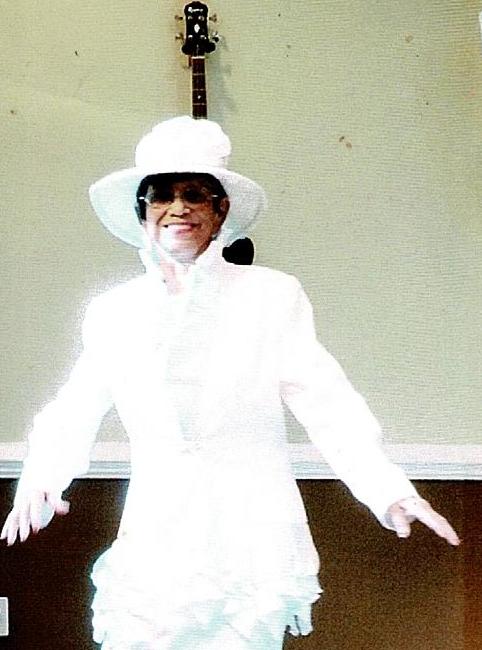 Today we celebrate the well-lived life of Ruth R. Handy. She quietly transitioned to join her husband of close to 50 years, Bishop William Talbot Handy, Jr., (W.T.) in the early hours of July 20, 2020. Ruth was born in New Orleans. Her father, Rev. Arthur Robinson, Sr. and her mother, Odessa Noel Robinson raised 8 children (including Ruth); Hazel Rankins, Arthurine Robinson, Cecile Dunham, Valena Benjamin, Arthur Robinson, Jr., Naomi Bookman, and Deborah Benjamin. She was mother to Dorothy Davis, Rev. Dr. Stephen Handy (Shelley), and Mercedes Cowley (Orrin, Sr.). She was blessed with eight grandchildren; Michael, Davis, Jr. (deceased), Stephen Davis, Christopher Davis, Stephen Handy, Jr., Noah Handy, Detra White, Orrin Cowley, Jr. (Alena), and Diedra Clay; nine great-grandchildren; Mia Davis-Pitoscia, Orrin Cowley, III, Cherity Cowley, Alonzo Clay, Ras Clay, Jordan Clay, Laila Clay, Jurnee Demi, and Jada Syann. She was preceded in death by Bishop W.T.Handy, Jr. (husband), and Michael Davis, Jr. (grandson). Ruth Handy was raised in New Orleans, LA. She received her Bachelor of Arts degree from Dillard University, where she met the love of her life, W.T. The two were married on August 11, 1948. When W.T. became a Methodist minister, Ruth proudly became the minister’s wife; a title she honored and a task she held dear to her heart. The life of as preacher’s wife began in Alexandria, LA, and one year later she moved with her husband to Baton Rouge, LA . Here, they started their family. She went on to move to Nashville, back to Baton Rouge, and then on to St. Louis where she was now the “Bishop’s Wife”. She was an integral part of her husband’s ministry; heading Sunday School Programs, singing in the choir, being active in the United Methodist Women, and heading minister's and Bishop's wives’ retreats. In Baton Rouge, Ruth became an elementary school teacher. She taught 5th and 6th grade Reading and Math. She went on to earn her master’s degree and became a Physical Education teacher. One of her greatest accomplishments as a P.E. career was being in charge of the May Day program every Spring. With her additions to that day, May Day at Scott’s Street Elementary in Baton Rouge was never the same. When she moved to Nashville, she taught P.E. at Crieve Hall Elementary for one year (2?). At Crieve Hall, she became the first African-American teacher and her students adored her. In Nashville, she became a trusted and devoted member of Clark United Methodist Church. Although they moved several times, Clark was always her “home” church. When they retired in 1992 and moved back to Nasvhille, she was thrilled to be back at Clark. She rejoined the choir and the United Methodist Women, worked with the Fish Fry, and started the Chrismon Tree Program at Christmas. She was always available to prepare her Red Beans and Rice and Gumbo for any church celebration. In 1998, her beloved W.T. passed away on Easter Sunday at Clark UMC. Her Clark UMC family surrounded her with much love and support. Ruth spent her last years living in Canterfield Assisted Living facility. She was known here for her kindness, helpfulness, spunkiness, and the sassy way she dressed. She also helped with their Mardi Gras celebration; bringing the flavor of New Orleans to her friends. Ruth missed being able to get to Clark as her health declined, but she kept up with events in the weekly bulletin. Ruth will be truly be missed by her children, greats and great-grands, multitude of nieces and nephews, friends, the community at Canterfield, and her Clark family
To send flowers to the family or plant a tree in memory of Ruth Handy, please visit Tribute Store
Thursday
23
July

Funeral Service PRIVATE due to COVID-19. However, it will be live streamed on FACEBOOK@ Lewis-Wright FD