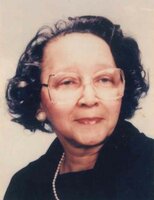 Carrie Beatrice Bryant Moses was born in McComb, Mississippi on December 30, 1931 and departed this life on Wednesday, November 3, 2021. The oldest of six, she was preceded in death by her parents, James Wayne Bryant and Ethel Alexandria Wilcher Bryant; two brothers, Earl Bryant and Melvin Bryant of McComb, MS; and two sisters, Barbara Bryant Conerly of McComb, MS and Norma Bryant Law of Claremont, CA. While in college at Alcorn A&M, Bea was an honor student and a starting guard on the basketball team. She was initiated into Alpha Kappa Alpha Sorority Incorporated, Gamma Phi chapter, in 1950. A kind and popular person, she was voted Alcorn Bravettes basketball co-captain and Miss Alcorn 1952. She received her B.S. degree in 1953. Bea married her high school sweetheart, Clyde Lee Moses, on June 20, 1954. To this union were born five children. Bea was a devoted, caring, and nurturing wife and mother. Her husband preceded her in death in 2002 after 47 years of marriage and committed partnership. Trained as an educator, Bea taught Home Economics to high school girls in Mississippi and in Nashville before becoming a full-time homemaker. After her youngest child started school, she used her sewing skills in men’s alterations at a major department store. Her cooking skills were always on display. She was known in the family and the community for her chow-chow, caramel cake, and homemade rolls. Bea received Christ at an early age and grew up in Summit Missionary Baptist Church in Summit, MS. As an adult, she was active at John Calvin Presbyterian Church in Nashville, teaching Sunday School and Vacation Bible School and singing in the choir. When the church merged with St. Andrew’s Presbyterian Church, she continued to teach, to sing, and to serve wherever she was needed. She was active in the community in support of her children through multiple parent-teacher organizations and sports boosters’ groups. She was a dedicated member of the Quarterettes social club. Alpha Kappa Alpha Sorority remained a lifelong commitment as she served the Alpha Delta Omega graduate chapter through the Rituals, Ethics, and Membership committees. In 1996, she was inducted into the Alcorn Sports Hall of Fame with recognition as the highest scorer ever on the women’s basketball team. Bea is survived by one brother, Clifton Bryant (Mary) of McComb, MS; five children: Thea Moses Robinson of Hendersonville, TN; Wanda Moses Luper of DeSoto, TX; Darlene Moses of Nashville; Alan Moses of Nashville; and Bryan Moses of Tucker, GA; eight grandchildren: Katrina Robinson, Jeffrey Robinson, Kristen Samara Hopkins, Sydney Luper, Alan Moses, Alonte Moses, Devon Moses, and Christopher Jones; and six great-grandchildren. In addition, she leaves a host of other relatives, family friends, church members and sorority sisters who will miss her dearly. Please keep the Moses family in your thoughts and prayers.