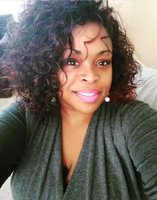 We celebrate the life and legacy of Ms. Shayla A. Overton who transitioned into eternal life, Monday, July 20, 2020. Born in Flint, Michigan to Melody Ramsey and Martin Beard on February 17, 1979, Shayla had a childhood filled with travel and transition. Before the age of 6 years, she had lived in Cincinnati, Ohio and Indianapolis, Indiana. While in Cincinnati, Shayla gave her life to Christ and was baptized at the Israel Baptist Church under the pastorate of Rev. Nathaniel Young. In 1990, after the marriage of her mother, Melody to Morris Tipton, Shayla would find herself relocated to Nashville, Tennessee. It was in Nashville that Shayla would establish life-long friendships that shaped and sharpened her life. She attended and graduated from Hunters Lane High School. Upon graduation, she went on to attend the University of Tennessee at Chattanooga, where she matriculated for two years. After leaving UT Chattanooga, she would eventually marry her high school sweetheart, Michael Overton. And, while they would eventually dissolve their marriage, their friendship would remain as strong as ever as they successfully co-parented two handsome, gifted and talented young men… Michael Jr. and Maxwell. She was a loving mother who took great pride in her sons. Shayla was a multi-faceted and multi-layered young lady who could mix and mingle with persons from virtually every socioeconomic status in society. She was intelligent and articulate and demanded such from her sons. Yet, she could make anyone feel comfortable communicating with her. While a serious side was prevalent in her personality, she had a unique way of weaving sarcasm and humor into almost any situation. Shayla’s quick wit enabled her to go toe-to-toe with anyone. No one was safe from her comedic one-liners or humorous nicknames. She was intensely loyal and valued family and friends above all. It was this loyal and humorous personality that created and cultivated continuous connections between Shayla and her friends. Shayla was preceded in death by her paternal grandparents, Dr. Martin and Delores Beard, her paternal aunt, Ms. Myrna Beard and her maternal grandmother, Ms. Jennie Ramsey (note: Shayla, being the first grandchild, shared a special relationship with her grandmother, Jennie). She leaves to cherish and celebrate her memories: Children, Ms. Myka Overton, Mstr. Michael Overton, Jr. and Mstr. Maxwell Overton; Parents, Mrs. Melody Tipton, Rev. Morris Tipton, and Mr. Martin Beard; Siblings, Mr. Tre’ Tipton and Ms. Morgan Tipton; Aunts, Ms. Monique Brumby and Ms. Jennifer Scruggs; Cousins, Ms. Jazmin Ramsey, Mr. Deyon Brumby (Alexis), Ms. Demetria Brumby (Devon Evans), Mr. Demonte Brumby, Mrs. Serenity Warsaw (Anthony) and Ms. Elizabeth Scruggs; Grandparents, Mr. Earnest Ramsey (Madeline); and Mrs. Josephine Scruggs (Julius); and a host of devoted friends [Michael Overton, Sr. (Shay), Ms. Janna Ridley, Ms. Tika Fintch, Ms. Katrina Stanford…].